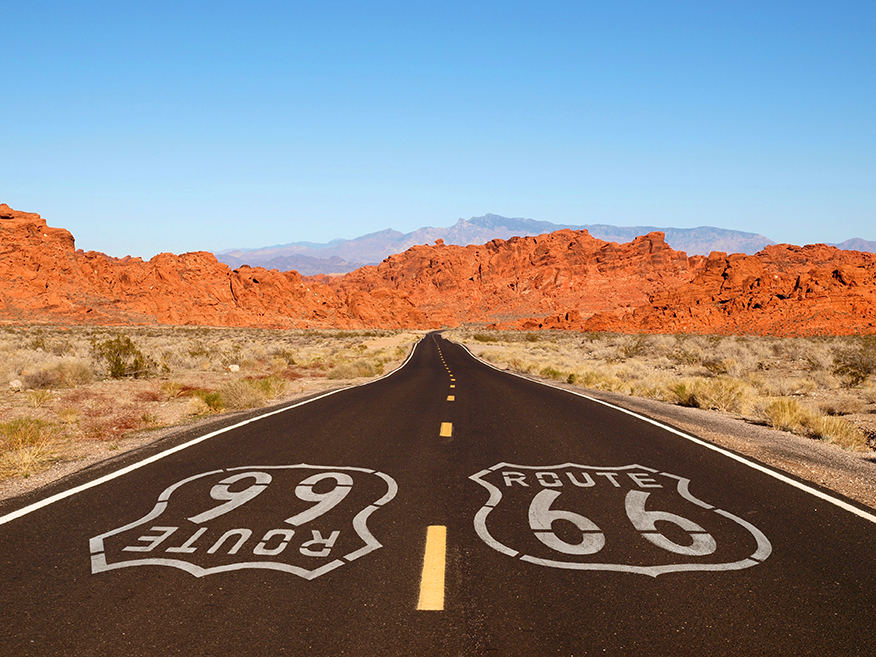 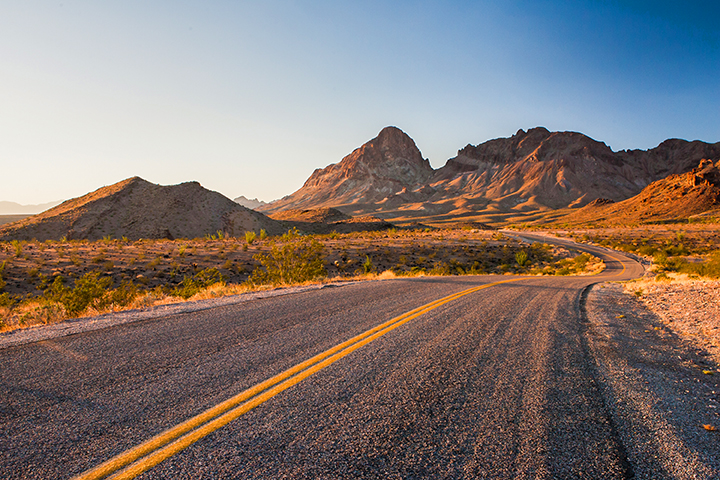 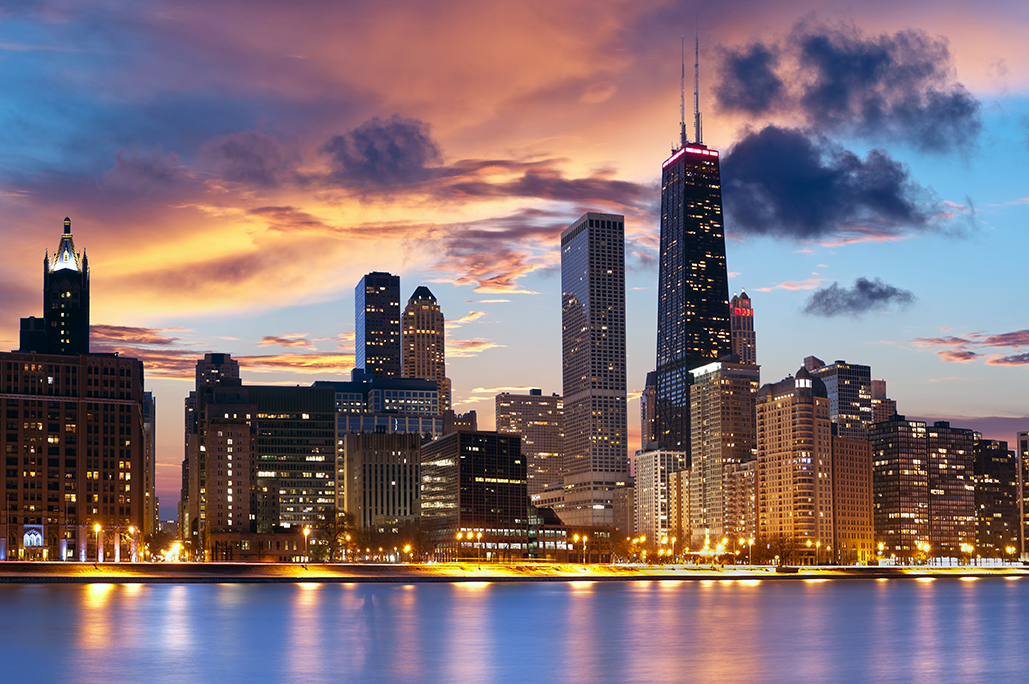 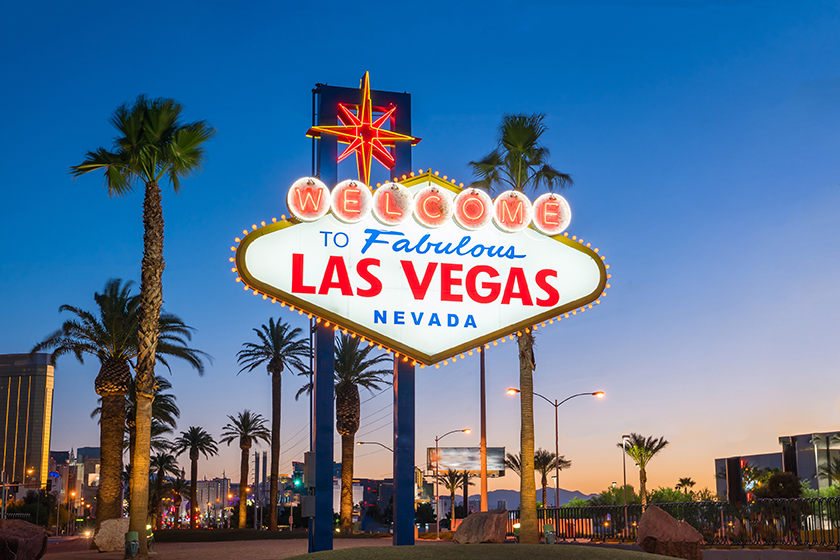 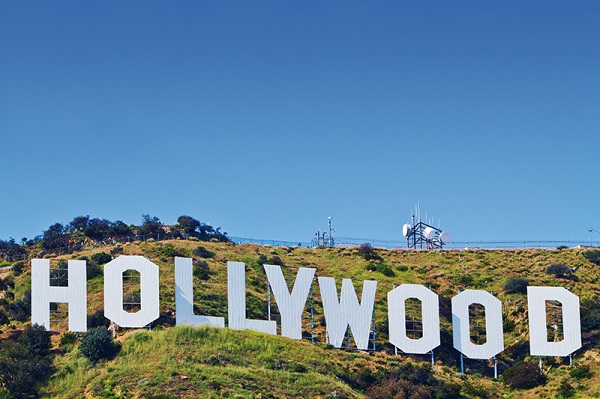 Your Route 66 self-drive adventure gets underway with a flight from the UK to Chicago. Pick up your hire car and drive to your hotel for a two night stay.

Your journey continues along Route 66 with one night in St Louis, Admire the 630 foot-high Gateway Arch as you take a trip on a paddle wheeler along the river. You'll then move on to Missouri, No visit to the city of Hannibal would be complete without stopping by writer Mark Twain's boyhood home and its adjoining museum.

Next, enjoy one night in Oklahoma where you’ll discover the lively entertainment district of Bricktown, and the urban districts of downtown Oklahoma. Then move on for one night in Amarillo and two nights in Albuquerque, before heading to Arizona for one night to discover breath-taking scenery at Petrified Forest National Park and the Grand Canyon.

Your self-drive holiday comes to an end on day 15 when you drop your car off at the airport and take your flight home to the UK.

T&C’s apply. USA & Canada Multi centres may not include all charges such as one way fees, deposits & local charges.

Your self-drive holiday starts with your flight from the UK to Chicago. Located at the southern tip of Lake Michigan, in America's north-eastern state of Ilinois, is the vibrant city of Chicago. Also known as the ‘Windy City', Chicago is also famed to be the birthplace of Chicago Deep Dish Pizza and the skyscraper, which dominate its skyline, and also home to the infamous gangster Al Capone.

Parks and beaches, jazz and blues, art and architecture, sightseeing, entertainment and shopping – what more could you want from a city. For the best view of the city take a trip up to Skydeck Chicago, at the top of the Willis Tower (formerly Sears Tower) and try out the latest attraction The Ledge, a glass-floored platform 1,353ft above the ground!

Downtown Chicago, also known as the Loop, is a shopper's paradise with Michigan Avenue, also called the Magnificent Mile, is lined with the finest shops and small exclusive boutiques. Explore the beautiful lakefront and the famous Navy Pier or enjoy Millennium Park with its art, architecture and many festivals. Chicago is also the starting point of the famous Route 66. Take a trip out to the capital of Illinois, Springfield, the final resting place of Abraham Lincoln. With so much to see and experience in and around Chicago it's easy to see why it's a popular choice for a holiday to America.

St Louis sits on the mighty Mississippi River in the USA state of Missouri. Admire the 630 foot-high Gateway Arch as you take a trip on a paddle wheeler along the river.

Stroll through the peaceful surroundings of Forest Park or get up close to the animals at Saint Louis Zoo. Gaze in awe at the neo-Byzantine Cathedral Basilica of Saint Louis or see the exhibits on display at Saint Louis Art Museum, City Museum, and Saint Louis Science Center.

Missouri Botanical Garden and The Magic House at St Louis Children's Museum are favourites with children. The Soulard district is the go-to place for dining in barbecue restaurants and listening to blues music in the clubs.

The midwestern USA state of Missouri is famous for its grassy plains and the forested Ozark Mountains. Kansas City on the Kansas border is the place to explore jazz clubs, Nelson-Atkins Museum of Art, and the National World War I Museum.

St Louis nestles on the Illinois border and is home to the 630-foot Gateway Arch alongside the Mississippi River. Branson sits in southwest Missouri and is also known as the 'Live Country Music Capital of the Universe' thanks to it thriving live music scene.

No visit to the city of Hannibal would be complete without stopping by writer Mark Twain's boyhood home and its adjoining museum. The life and career of President Harry S Truman comes to life at Harry S Truman Presidential Library and Museum and the Harry S Truman National Historic Site in Independence. The state capital of Jefferson City hosts the Governor's Mansion, Missouri State Museum, and the Lewis & Clark Monument.

Oklahoma City is the capital of the USA state of Oklahoma. This bustling city is famous for its cowboy culture and capitol complex, not forgetting that it's also surrounded by working oil wells.

Visit Oklahoma City National Memorial and the nearby Survivor Tree that pay tribute to the victims of the 1995 bombing of Alfred P Murrah Federal Building. Get up close and personal to the wildlife at Oklahoma City Zoo or discover the interactive exhibits at Science Museum Oklahoma.

See the artworks at Oklahoma City Museum of Art or stop by the idyllic surrounds and interactive urban park at Myriad Botanical Gardens. No visit to Oklahoma City would be complete without enjoying the funky shops, restaurants, attractions, and entertainment at the urban renewal project and premier entertainment hub of Bricktown.

The city of Amarillo is located in the USA state of Texas and is gateway to the vast Palo Duro Canyon State Park. Go to see the partially-submerged graffiti-decorated cars at Cadillac Ranch or explore the art deco and Spanish Revival buildings in the US Route 66-Sixth Street Historic District.

Step back in time at the Panhandle Plains Historical Museum or discover how the famed Quarter Horses shaped the American West at American Quarter Horse Hall of Fame & Museum.

View the eclectic artworks on display at Amarillo Museum of Art or the vintage vehicles and artefacts at Jack Sisemore Traveland RV Museum. Encounter exotic wildlife at Amarillo Zoo or check out the stunning flora and fauna at Amarillo Botanical Gardens.

The USA city of Albuquerque sits in the high desert alongside the Rio Grande in New Mexico. This city of contrasts boasts a modern downtown and old town area.

Step back in time at Albuquerque Museum of Art and History, see the collection of motor vehicles at Unser Racing Museum, or discover the culture of the Pueblo people at the Indian Pueblo Cultural Center. Gaze in awe at one of the city's architectural landmarks, the 1920s KiMo Theatre, or view the 20,000 ancient images carved into the volcanic rock at the Petroglyph National Monument.

The USA city of Holbrook sits alongside the banks of the Little Colorado River at the heart of Navajo County in Arizona. Holbrook boasts rich 'Wild West' history and is the gateway to the nearby Petrified Forest National Park, the Painted Desert, and a number of Indian reservations.

Admire the whitewashed concrete and steel teepees at Wigwam Village or venture further afield to the Hubbell Trading Post National Historic Site on the Navajo Reservation.

The state of Arizona is located to the south west of the USA and is famous for the Grand Canyon. No visit to Phoenix would be complete without stopping by the Heard Museum and Frank Lloyd Wright's Taliesin West; while to the north of the city you can admire the red rock mountains and buttes of Sedona.

The 726 feet-high and 1,244 foot-long Hoover Dam spans the Colorado River linking Arizona to Nevada. Canyon De Chelly National Monument and the nearby Petrified Forest National Park are both sights to behold. The Organ Pipe Cactus National Monument on Arizona's frontier with Mexico and Tumacacori National Historical Park south of Tucson are must-sees too.

With its roulette wheels, dazzling shows and little white chapels, Las Vegas doesn't really need an introduction. Cruise along the iconic strip and you'll feel like you're on the set of a hundred Hollywood films as you pass the gleaming arcades and show-stopping hotels.

But there's more to this desert city than neon lights and late nights; head into the wilderness on a drive to Death Valley or take a trip to the breathtaking Grand Canyon. Best viewed by helicopter, this jaw-dropping wonder has to be seen in real life to be believed.

Back on the glittering Strip, there's non-stop shopping, spectacular entertainment, white knuckle rides and gargantuan all-you-can-eat buffets to enjoy. With their amazing themes and landmark features, hotels in Las Vegas are destinations in themselves.

Sun soaked boulevards, dreamy beaches and celebrities galore: Los Angeles is possibly one of the most glamorous places on the planet. Get goosebumps when you spot that sign on the hillside and stroll along the Walk of Fame.

Gaze longingly at the extravagant mansions of Beverly Hills and look out for the rich and famous on Rodeo Drive. Excellent shopping, delicious cuisine and dramatic Pacific coastline all add up to L.A.'s amazing holiday credentials. As well as the star studded attractions of Tinseltown, there's an offbeat side to the city, where you can hunt down edgy art galleries and hip live music venues. Head out of town for brilliant theme parks and discount shopping malls.

We love L.A. for its endless list of things to do and unique vibe - and we think you'll know what we mean from the moment you arrive. We've chosen a selection of gorgeous hotels to make your trip to L.A. even more amazing.

Drive to Los Angeles airport for the return flight home to the UK.